Healthy teeth are about more than just a pretty smile. Your oral health has a major effect on the overall health of your body, not just in your mouth. By maintaining healthy teeth and gums, you can make your body healthier from head to toe.

Bacteria in the mouth cause tooth decay – by feeding on the sugars in the foods and drinks we consume – they leave behind the waste, in the form of a biofilm known as dental plaque.

Our mouths have lots of bacteria that is usually harmless. (Did you know that the bacteria in our body aids with digestion and other biological tasks?) However, if you do not brush or floss regularly, bacteria can reach dangerously high levels. When this happens, tooth decay, gum disease, and oral infections can be the nasty result.

Related Article: Tooth Decay Dangers: Can It Kill You?

Health Risks Throughout the Body

There is evidence that the oral bacteria and high level of inflammation associated with the serious gum disease known as periodontitis can play a role in diseases in other parts of the body.

The following health issues and diseases are linked with poor gum health:

The Impact of Gum Disease

Did you know that 85% of Americans suffer from gum disease, yet only 60% of those infected know they have gum disease? Gum disease is an infection of the tissues and bone that support your teeth and is the leading cause of tooth loss. However, the impact can extend beyond your mouth.

Research shows that there is a connection between gum disease and other serious conditions such as:

If you have one of these systemic conditions, it is important to talk to your dentist about your risk for gum disease and the best treatment options.

Gum Disease Symptoms Can Range from:

Sometimes there are no signs of gum disease, which is why it’s essential to visit your dentist every six months for a checkup.

Related Article: How to Stop Bad Breath: A Stinky Situation

The three goals of treatment involve:

Initial treatment options can include Laser Pocket Disinfection or scaling and root planning (also known as deep cleaning). There are surgery options for advanced gum disease.

By protecting the health of your teeth and gums, you can keep yourself healthier too. Practice good oral hygiene daily to prevent overgrowth of bacteria.

Sugar Hurts Teeth: Do You Sip and Snack All Day?

You should also have regular dental checkups and cleanings. If you notice a problem with your teeth or gums, call for an appointment right away. The sooner these are handled, the sooner you will be back to full health. Charles R. Kimes, DDS provides general and family dentistry in the Overland Park, Kansas area to keep his patients healthy – including healthy teeth, healthy gums, and a healthy body. Time for your checkup? Call to schedule today. 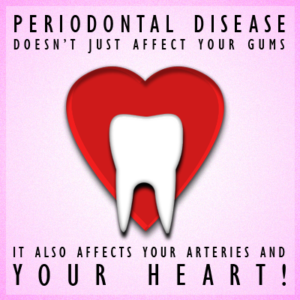 When someone is stricken with an illness, they often feel as though they are “fighting” the illness, and while it has become something of a cliché way of describing it, indeed “fighting it” is actually a quite accurate way of putting it. Fighting a disease is essentially like fighting an enemy within your own body and while fighting one disease at a time can be very tough, fighting two different diseases at one is a harrowing experience to say the least!

Unfortunately, this has been the case for many people, as not having accurate dental health awareness, overlooking routine oral hygiene procedures or improperly preforming them can lead to the condition known as Periodontal Disease!

Whether known as Periodontal Disease, or more formally as Periodontitis, or even simply as gum disease, this progressive illness should not be taken lightly! While initially considered to be more of a cosmetic issue, periodontal disease has in many cases been thought of as little more than a nuisance that merely discolors your teeth and gives you bad breath. However, this is a gross misconception. In reality, gum disease is a progressive infection that while beginning in the gumline, eventually spreads throughout the mouth, often damaging everything it reaches. In some of the more severe cases, gum disease has been known to entirely destroy a sufferer’s jawbone, or even spread into other regions of body. Once periodontal disease has reached this stage, the likelihood of it triggering additional illnesses or interacting with pre-existing ones becomes a serious concern, that may even prove to be life-threatening.

While periodontal disease can affect a person’s health in a number of different ways, the link between periodontitis and a person’s cardiovascular health is perhaps the most prominent. As something of an umbrella term, cardiovascular or heart disease pertains to any such conditions that may block the heart’s valves or restrict its blood flow in anyway. As mentioned previously, in severe cases of gum disease once the excess bacteria enter the body’s blood vessels, it will begin to travel throughout the body. If the periodontal bacteria reach the heart, it will likely inflame vessels causing blood clots to develop and damage to occur. This damage will slowly began restricting the flow of blood, effectively choking the heart and forcing it to pump faster while producing less and less.

Given this data, skeptics in both the dental and medical fields are quick to point out that despite the previous information, periodontal disease still does not guarantee an eventual heart attack. While this is certainly true, according to a recent study conducted by Harvard University, individuals afflicted with gum disease have at least a two to three times higher probability of suffering a heart attack, stroke, or other sort of cardiovascular-based issue; alas, proving the correlation to be self-evident.

Dental Health Awareness: What to look for

Along with the clear link to cardiovascular illness, periodontal disease can also play a major role in the onset of or worsening of diabetes mellitus, which if mismanaged may wreak havoc on a person’s health and overall quality of life.  With so many hazards and associated issues, you’re probably wondering what exactly can be done to stop gum disease? Odd as it may sound, the key to preventing periodontal disease from appearing in your life is prevention itself. Much like a large hornet’s nest that has been left to grow and prosper, (thereby becoming a problem) gum disease is a progressive illness that will only become an issue if it is neglected, improperly managed, and ultimately allowed to thrive. This is one of the main reasons we talk so much about dental health awareness.

As you can imagine, there are multiple factors such as; lifestyle habits or underlining issues that can play a major role in the development or worsening of periodontal disease which is why your dental health awareness is important to our team.

Such risk factors may include:

As mentioned previously, what truly makes a disease like Periodontitis so dangerous is its uncanny ability to trigger additional issues such as heart disease. While fighting this gruesome twosome of periodontal disease and heart disease is certainly an uphill battle, you don’t have to fight alone! At Overland Park Dentistry, Dr. Kimes and his wonderful staff are here to help you in this battle by providing you with some of the highest quality dental care in the Kansas City area.

Make no mistake, gum disease is very dangerous and if left untreated the consequences could be dire. So, please don’t let this happen to you, come see us at Overland Park Dentistry and let’s fight periodontal disease together!